Thank You Veterans (not cancer related)

Because it is Veterans Day.

God only knows where we would be without the service and sacrifice of our brave veterans. To those presently in the military- stay safe and THANK YOU.

This is my favorite veteran story…

About 20 years ago, I had floated to the medical short stay unit and had a patient who was having an MRI guided procedure.  I asked him if he had any metal filings or shrapnel exposure.  It was the day before Thanksgiving, so it was ridiculously quiet and slow, and there were only a couple of patients there.  This gentleman said  “yes” he had shrapnel  exposure, started crying and “did I have time to hear about it?”.   About one and a half hours later I had heard his story of how he was at Omaha Beach/part of D-Day invasion.

He spoke of the scene, the friends he lost, the nurse who helped take care of him afterwards.  He wept intermittently throughout.  He told me that he had never told his story until that day, not to his wife, not to his grown son.   I asked him why he was telling me.  Basically because he was getting older, I had asked about the shrapnel (a standard question if you are having an MRI) and because I reminded him of his nurse post D-day.

A few weeks later he returned with his son to give me a wooden bowl that he had made for me.  He had started a dialogue with his son about his war experience.   It was one of those encounters as a nurse that you never forget, and I think of him of him every Veterans and Memorial Day (and every time I use that bowl). 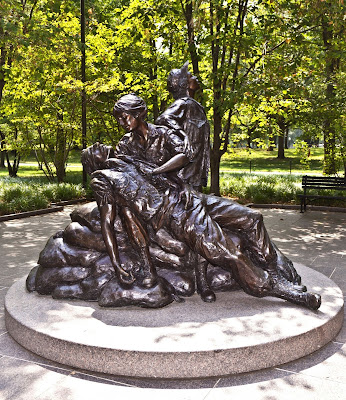 Some of my favorite veterans