May is Melanoma Month


I hate melanoma. It is probably one of my most hated cancers. I have seen what stage IV melanoma can do. My advice? Do everything you can do to prevent getting it.


My favorite website for all things melanoma is Mike's Page. The founder of this website is Pete Tustison. He lists almost every resource you could imagine about melanoma on this website. He lost his son to melanoma and devotes his life to keeping this website updated for people to learn about melanoma. He also is responsible for running a list serve for melanoma survivors to contact each other. He is a truly great man. I encourage anyone who has melanoma or wants to know about melanoma to visit his website.

Most of the information you read below has come from these 3 resources.

Melanocytes are cells located in the epidermis (outer layer of skin) that are responsible for producing melanin, a brown pigment that helps screen against the harmful effects of Ultraviolet light.


If caught in the earliest stages, melanoma is entirely treatable with a great survival rate. If untreated and allowed to spread, there is no known cure at present (Although there are 2 new drugs on the scene now that give us hope for the first time in years in the fight against melanoma).


It begins in the skin cells which produce the dark protective pigment called melanin. Melanoma cells usually continue to produce melanin. This is why can appear in mixed shades of tan, brown and black. 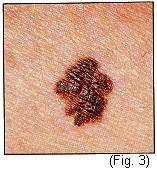 ·         Melanomas may turn red, blue or white and they also might crust and bleed.

·         In women, melanomas commonly occur on the arms and legs, while in men they may develop on the back.

·         Most start on a pigmented patch such as a mole or a freckle. Watch out for itchiness or change in the size, height, shape, color, texture, or sensation of a mole.

·         In a survey by the Center for Disease Control, 74% of young adults and 50% of older adults said that they had little or no knowledge about melanoma.

·         Melanoma is linked to excessive sun exposure in the first 10 to 19 years of life. During these years almost 80 percent of a person's lifetime sun exposure occurs, according to the American Academy of Dermatology.

·         A mole that changes color, textures, grows, becomes irregular in shape, or that is bigger than a pencil eraser.

·         A spot or growth that continually itches, hurts, becomes crusty, scabs, or bleeds.

·         An open sore that does not heal after 4 weeks or one that heals and reopens. Regular skin self-exams could save an estimated 4,500 lives annually. Anytime you are concerned about a growth or spot on your skin, it is best to seek the advice of your physician or a dermatologist.


Years ago, a representative from the Schering-Plough Company gave me these slides.  There are some great pictures of melanotic lesions on them. 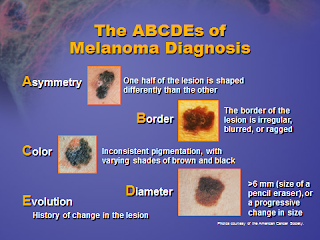 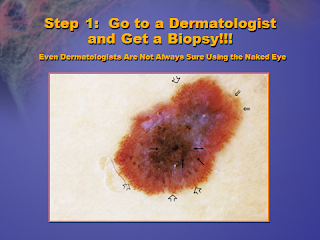 Don't let it grow to resemble something like these pictures: 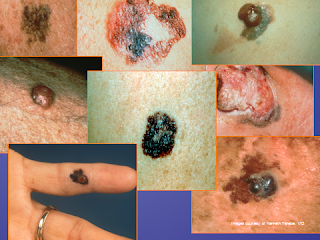 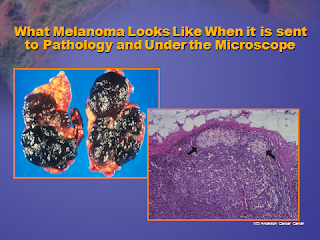 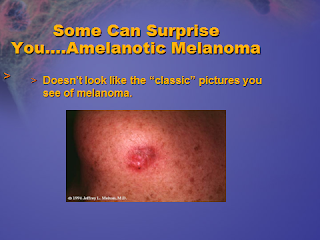 No Matter What the Signs Say it is Not Safe to use Tanning Beds!!!


·         People 35 or younger who used the beds regularly had a melanoma risk eight-fold higher than people who never used tanning beds.

·         Even occasional use among that age group almost tripled the chances of developing melanoma.

·         Lights used in tanning beds and sun lamps give off mainly ultraviolet-A (UVA) radiation, according to the study. UVA was classified as a probable human cancer-causing agent by the International Agency for Cancer Research (IARC) in 1992, according to the Swedish study. IARC is a part of the World Health Organization.

·         "They may think that a 'base' tan will protect them from skin cancer, but in reality, the lights just act as a radiation multiplier, further increasing their skin cancer risk," Dr. Weinstock says.

You need to be especially careful in the sun if you:

How to Protect Yourself:

Australia is the country with the highest rate of skin cancer in the world.  They have a great campaign that they start with young children to prevent skin cancer.  It is the "Slip-Slop-Slap" Campaign. “Slip on a shirt, slop on sunscreen (SPF 30+ waterproof and keep reapplying every 2 hours!!), and slap on a hat" 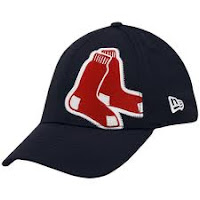 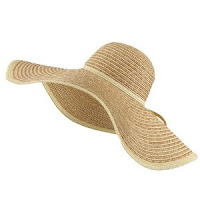 I first tried Planter's sunscreen in Italy and it was fantastic.  It doesn't have that sunscreen "smell" that you often get.  I'm not sure if you can buy it in the U.S. or not.  If you live in Italy, please send me some and I'll mail you the cash!!!!  Love it.

My fab niece introduced me to this Neutrogena sunblock in New Orleans.  No bad smell, very light and works great.

Be mindful. The highest level of ultraviolet rays: 10 a.m. to 4 pm.


Yearly Dermatology visit if you have a lot of moles and are fair skinned.

Dermatology Visit if you notice a suspicious skin lesion that changes. Don’t just listen to your PCP.


Mole or skin mapping if available

Check your own skin or have someone else check it for you (makes a great pickup line!!)

Stay out of tanning salons!!!

Website for UV protectant clothing (search the web, there are quite a few of these): 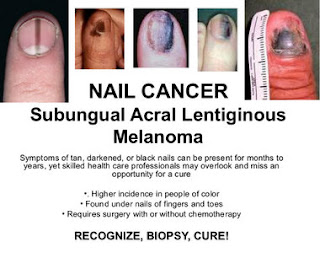 One more thing....you should also be mindful to check your toenails and fingernails.  A black streak or blackened nailbed that looks like it has been injured can be a sign of melanoma under the nail.  This is also called subungual melanoma.  The fingernail on the far left is classic.  Check out your nails.  If you use polish, give them a good eyeballing when they change your polish. 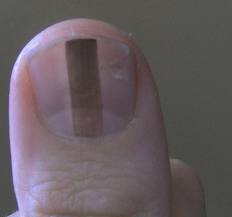 Email ThisBlogThis!Share to TwitterShare to FacebookShare to Pinterest
Labels: melanoma